The turn toward abstraction in the world of visual art was heavily controversial, many claiming that art without figural representation was “barbaric” (Shapiro 13). However, the elimination of representational figures allowed abstract forms to speak for themselves. Critic Meyer Shapiro said of Abstract Expressionism (from now on referred to as AbEx),

“What was once considered monstrous, now became pure form and pure expression, the esthetic evidence that in art feeling and thought are prior to the represented world. [With the rise of Abstract Expressionism,] The art of the whole world was now available on a single unhistorical and universal plane as a panorama of the formalizing energies of man.” Shapiro 13).

Abstraction removes the viewer from a concrete representational form and forces him to define artwork on its own terms. Shapiro argues that pure abstracted forms were materially and philosophically honest, whereas representational art was weighted down by codes and contexts. Rather than painting symbols to tell a story, AbEx artists were interested in where meaning came from and how it was transmitted from artist to viewer. That is, they wanted to see the transition from noumenon to phenomenon.

The noumenal world is the world in which ideas are born. Ideas in the noumenal world cannot be described; once they are formally realized, they drop to the phenomenal world. While artists recognized they could never depict the transformation itself–any kind of representation, symbolic or concrete, constitutes a phenomenal idea– they depicted the transition through gesturalism (Smith).

The act of writing poetry also tracks the transition from noumenon to phenomenon. Rather than paint, poets use words to bring ideas across worlds. Since I first came across the noumenal and phenomenal worlds in my studies of contemporary art, I was interested in the way a poem would look if it were realized as an Abstract Expressionist painting.

For this project, I manually grouped the verbal signifiers of each symbol in order to render each as a line or “symbol-thread.” Poemage’s algorithm created the direction and design of each symbol-thread, separating them from any human influence, which was one of many goals in AbEx art. Using symbol-threads as brushstrokes, the Artistic Realization below shows what “Spain” might actually look like if it were gesturalist painting.

*Though the point of this project is to talk about symbols as gestures, the artistic realization includes other poetic forms such as rhyme and assonance. These can also be considered gestures, since they relate to the meaning and move from noumena to phenomena, but I am mainly interested in symbolism since it is an abstract form (rhymes, for example, fortify and create meaning, but they are not necessarily coded in such a way that they stand for something specific). Furthermore, it should be noted that I did not have a hand in creating the other variables or deciding which words were included in them like I was with the symbol-threads.

As for the symbol-threads themselves, I was particularly interested in classical symbols, the Sublime, and the rise of Fascism–not only are these symbols important to “Spain,” but also to Abstract Expressionism as a discipline (see the further reading page for an article on the AbEx as democratic propaganda) 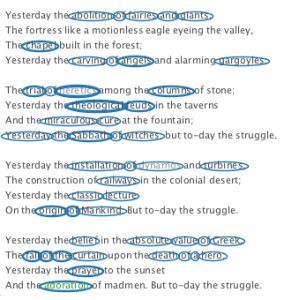 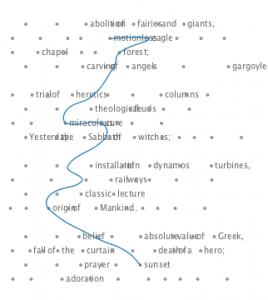 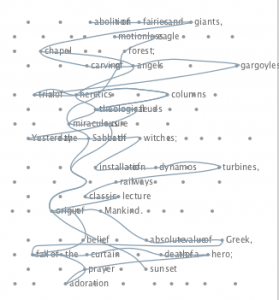 The words in the image at the left are surrounded by different colored circles in order to distinguish symbol groups. The symbol-threads themselves are also connected to the words. The central image depicts the classical symbol-thread, while the image at right depicts all three symbol-threads working in the same stanza.

Art historians often associate classical Greek/Roman architecture, mythology, and style with democracy. In the Renaissance and onward, these symbols also marked humanist ideals, since they called for a return to the classics, exemplified by the arts and philosophy of Ancient Greece. For Auden, democracy is most pertinent because of its role in Spanish Civil War; when the Spanish Republic was threatened by Fascism, the country’s humanistic values (which are a part of democratic society) were also threatened.

Auden establishes the poem firmly in the classical lyric tradition when he examines the passage of time, morality, and politics in this section. The poem begins, “Yesterday all the past” (1).  By using the word “yesterday,” the poem establishes itself in the ever-changing present. The tense is further emphasized by the phrase, “but to-day the struggle” (16).  Once Auden has established the poem in the present, he  reveals the importance of the poem’s political context, naming the war “the struggle”. During Auden’s present, when the poem was written, Spain was in the midst of a political change from democracy to Fascism. The rest of the poem takes on a kind of dual-presence in time, it’s symbolism relating both to the Spanish Civil War specifically and a future (for Auden)/present (for the reader) threat to democracy. The lines at the end of this section do the best at marrying the two ideas. Auden writes, ”Yesterday the belief in the absolute value of Greek,/The fall of the curtain upon the death of a hero”  (17-18). Not only does the poet name the symbol directly, but he also invokes democracy with the reference to tragedy. In this case, the hero is democracy and the death is a reference to the rise of Fascism. 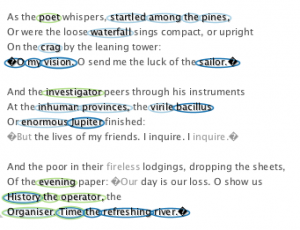 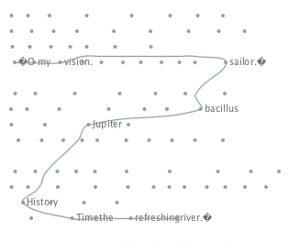 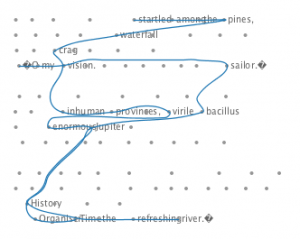 From here, Auden continues the use of classical symbolism in “Spain,” but for different effects that ultimately lead to the Sublime symbol-thread. He writes,

‘O my vision. O send me the luck of the sailor.’

And the investigator peers through his instruments

At the inhuman provinces, the virile bacillus

The archaic “O” and the sailor (perhaps Odysseus) are continuations of the reference to Ancient Greek art and poetry. The speaker is revealed as “the poet,” who is surrounded and “startled by the pines” (21). The natural symbolism, since it is so overpowering, is indicative of the Sublime. In art history, the Sublime relates to that which cannot be defined by human terms. It is often associated with natural imagery, time, and divine presences (Smith). The speaker’s speech implies another presence; since that presence has the ability to know and influence other lives, it is omnipotent. Furthermore, the juxtaposition between the “virile bacillus” (a bacterium) and “enormous Jupiter” (a planet and the Roman name for the king of the gods) emphasizes the speaker’s insignificance and mortality (27). The lines at the end of the section also establish “History… the Organiser” and “Time the refreshing river”– surely a reference to the mythical River Styx–  as Sublime forces that cannot be explained or affected by human means (31-32). 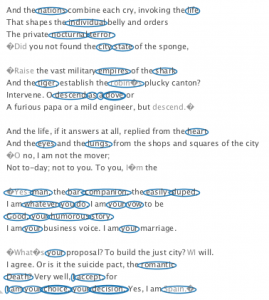 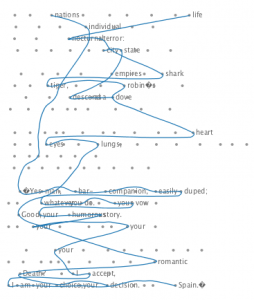 The final section of the project sees the inevitable marriage of the two symbol-threads when the omnipotent presence in section two is revealed to be Life. Auden writes,

I am whatever you do. I am your vow to be

I am your business voice. I am your marriage.

What’s your proposal? To build the just city? I will.

I agree. Or is it the suicide pact, the romantic

Death? Very well, I accept, for

The “romantic death” is reminiscent of the tragic hero in the sixth stanza, which, as already stated in section one, is directly linked to the tragic death of democracy during the Spanish Civil War. With the statement “I am you,” Life addresses both the poet and the reader. Life/Spain identifies itself as a reflection of the will of the speaker and the reader. In the context of the Spanish Civil War, this will calls for a suicide pact; when the Fascist regime arises, the poet/speaker’s participation in and acceptance of it will destroy the very society that allows him to be artistic.

The confrontation between Life and human speaker brings the Sublime symbol-thread to life since it represents and activates a similar confrontation for the reader. A human reader interacts with the poem in the act of reading it and gaining information and insight from it. The poem itself, as a vessel for meaning, is a product of the poet’s confrontation with the Sublime–in this case, the noumenal world. Since the noumenal world is unknown and cannot be comprehended without the help of the phenomenal world, it is in a sense, Sublime. The same can be said for AbEx art, where the brushstrokes left behind are products of the very same confrontation, handled in a different way. This is why, when I ran “Spain” through Poemage, it looked so similar to an AbEx artwork. The poet decides which words to use and in which order to use them, but she does not have complete control over her impressions on the world or of the world. Nor does the painter. Ultimately, both abstract artists seek only to create a record of the confrontation with the Sublime, either with words or paint.